Kashrut – תורשכ – literally ‘fit’, is the set of Jewish religious dietary laws expressed in the Torah (bible) and codified in the Shulchan Aruch. Food that may be consumed according to the Jewish law is termed kosher: meaning ‘fit’.

To share a bit of Jewish culture with our guests, here are some of the rules we follow at Bellacarne and the reason why they are applied.

At Bellacarne there is no milk or derivatives because in the Torah it says 3 times: “…you will not boil a goat in its mother’s milk”, this is why it is forbidden to mix meat and milk in Jewish cuisine.

At Bellacarne we only use certain cuts of meat because of certain biblical passages. One of these episodes says that Jacob, one of the fathers of Judaism, dreamt of a mysterious fight with an angel; when the angel realized Jacob was stronger than him, he decided to hit him on the sciatic nerve, causing him to limp. Jacob kept fighting until the angel begged him to let him go so he could reunite with God. Jacob then proceeded in asking for the angel’s blessing, and the angel gave him the name of Israel. This is how the prohibition of consuming meat passed by the sciatic nerve was born.

The reason why certain parts of meat found in the hindquarter of the animal cannot be consumed is because there is a certain kind of fat known as ‘chelev’, which used to be completely burned off during sacrifices in Jerusalem. If this particular type of fat isn’t removed completely, the meat cannot be consumed.

Certain kinds of wine can only be opened by an active member of the Jewish community/religion. Wine represents an important symbol in the Jewish religion, which led to the creation of a specific type of pasteurization called mevushal. Once the wine has gone through this process, it can be opened by anyone. 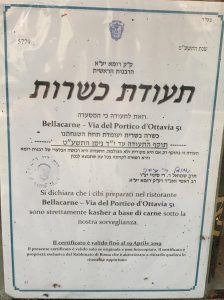 There are many other rules within the complex world of Kasheruth.

We have given you a small taste, but please feel free to ask our staff any questions or curiosities you might have.

By browsing this site you accept our privacy policy.OkPolicy